In fact, the Mid Ulster had 2 nominees in the running, as both David McQuigg from Fivemiletown FC and Elaine Junk from Mid Ulster Ladies FC had been shortlisted for the prestigious award. The People’s Award winner was decided by an online public vote and has rewarded for her work in developing girls and women’s football in Northern Ireland.

The awards, now in their 17th year, recognise the huge contribution to community football of clubs, coaches and volunteers that make grassroots football throughout Northern Ireland such a success. Elaine Junk, the first woman to win the People’s Award, initially got involved in football in the mid-1990s. Currently chair of Mid Ulster Ladies FC, mum-of-two Elaine was the first woman elected on to the Mid Ulster Football Association and continues to represent and advocate for women’s football on the Irish Football Association’s Council. She is also a former chair of the Northern Ireland Women’s Football Association. After commencing work with Fivemiletown United FC in 1978, some 39 years later, Davy McQuigg remains as enthusiastic as ever and is a vital part of the football club’s set up. Davy was very worthy runner-up indeed.

At the McDonald’s Irish FA Grassroots Football Awards ceremony, more than 180 guests were there to celebrate and recognise the highest ever number of nominations across eight categories. Among the special guests were McDonald’s Head of Northern Ireland Football and Spurs legend Pat Jennings and McDonald’s Football Ambassador and Arsenal great Martin Keown, as well as Julie Nelson, the first Northern Ireland senior women’s international to earn 100 caps, who was a VIP guest too.

The Volunteer of the Year accolade went to Phil McKinley, who has dedicated his time over many years to Lurgan Town, where he was a successful player before becoming a coach for both boys and girls teams and running a programme for children with learning and physical disabilities. And he is also secretary of the Co Armagh club.

Oxford Sunnyside FC were also recognised, having received a regional accreditation award. Neil Ardis picked up the Inclusive Award for his work with Valley Rangers Youth in Kilkeel and in setting up, in conjunction with Autism Support Kilkeel, an autism football group. He has also established a girls’ team in the Co Down town. Well done to Elaine, Philip, Davy and all of the other MUFA football folk on their success! 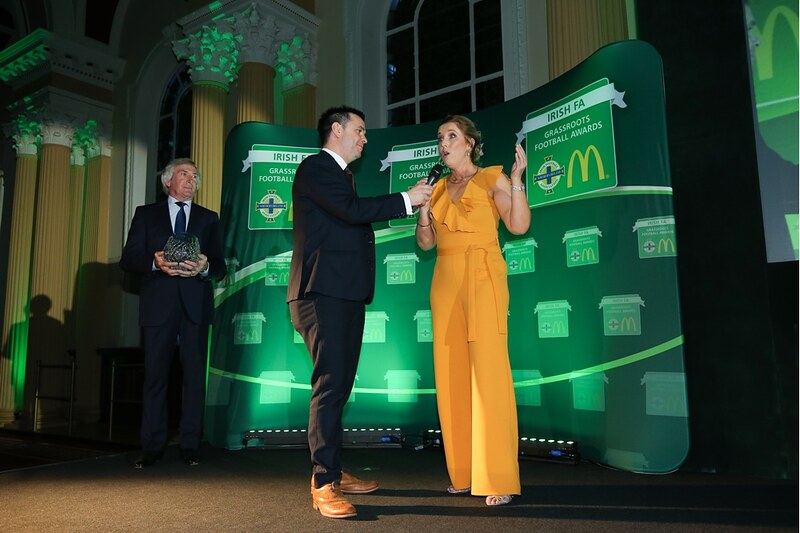