To his surprise at the weekend's MUFA AGM in Banbridge, Noel McClure was presented with the prestigious Ivan Marshall MUFA Merit Award Trophy for his outstanding services to Mid Ulster Football and beyond for many decades.

Clubs that Noel has been involved with over the years include initially Tandragee Rovers, then Loughgall where he served as Secretary for 33 years and more recently Dungannon Swifts.

has also been an Office Bearer at the MUFA and has served on IFA Committees for decades too, including as a former IFA Junior Committee Chairman, and in recent years received his 25 year IFA pin.

On receiving the trophy from the Chairman, Noel's selflessness and respect for others again shone through when he paid tribute to the winners before him and those he said to follow, saying that he hopes that he also is a suitably worthy winner and expressed his great honour in receiving the award.

Noel pictured on the left with his nominator Norman Livingston. 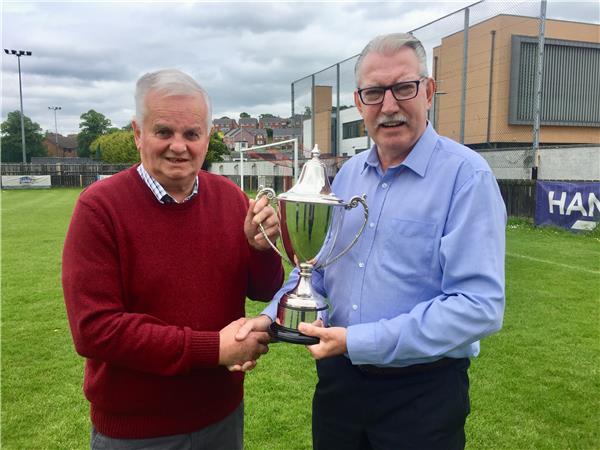