Congratulations to Warrenpoint Town on winning the Euro Electrix Mid Ulster Cup trophy for the second time in their history. Commiserations to Annagh United, who also played their part in a great final, before a sizeable crowd creating a fine noisy atmosphere at Armagh City’s Holm Park.

It was a close competitive final throughout, where each player gave his all, with referee Lee Tavinder and his assistants having to keep on top of.  Warrenpoint opened the scoring early through an own goal deflection after a low shot/cross from the right.  Annagh equalised just after the half hour through a Robbie Norton shot in off the post from inside the penalty area, before Warrenpoint restored their lead for half time with another fine low shot from the inside right position, from Luke Wade Slater.
Early in the second half Annagh equalised for 2-2 through Peter Duffin drilling home at the back post after a cross by former Warrenpoint player Stephen Murray.  A flowing move saw Warrenpoint later restore their lead through Alan O’Sullivan before Stuart Hutchinson’s late close range conversion secured the trophy and a 4-2 win.
Warrenpoint skipper and centre half Dan Byrne picked up the Man of the Match Award, for helping to hold the Warrenpoint Town back line together in a game that always threatened goals and helped give his team a platform out from the back. 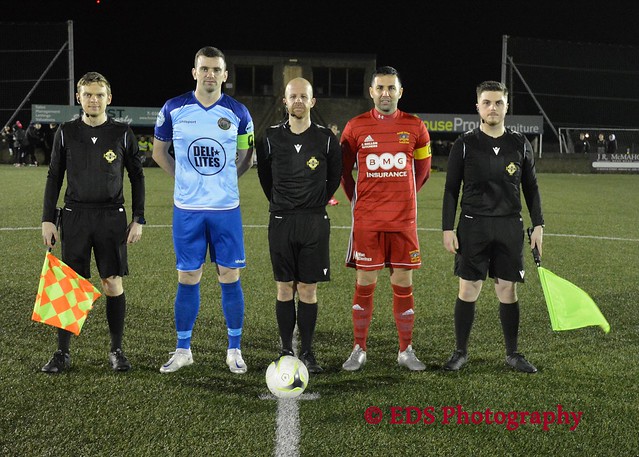