Congratulations to Portadown U18 on winning the Euro Electrix Mid Ulster Youth Cup Final. Commiserations to Newry City U18, who had played well to reach the final, which was staged before a healthy crowd at Armagh City’s Holm Park.

A strong Portadown, who had impressively accounted for the teams of NIFL clubs Loughgall, Dungannon Swifts and Warrenpoint Town, got off to the perfect start through their forwards to go 2-0 up within 10 minutes.  Portadown’s front two in particular of Emerson and Rutkowski proved a handful.  Then the half did settle down but just before the break the Portadown forward line struck again to leave the half time score at 3-0 to the Ports with two goals to Rutkowski and one to Emerson.
Portadown struck another early double in the second half before the half again settled down, and then Newry pulled a goal back for 5-1 with a lobbing strike through McParland from outside the penalty box on the right. A couple of later goals by Portadown saw the  Ports ultimately run out 7-1 winners.  Portadown’s second half goals saw Rutkowski complete a hat-trick, with a goal apiece for Skelton, McCullough and McCann.
The Man of the Match Award went to Portadown’s hat-trick hero Igor Rutkowski, similar to the same player picking up the Award from the same official in an earlier winning goalscoring round of the IFA Youth Cup. 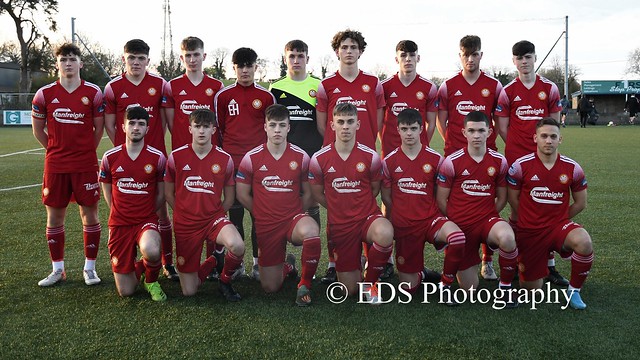